By continuing to browse this site, you agree to the use and writing of Cookies on your connected device. These cookies (small text files) are used to track your navigation, update your shopping cart, recognize you the next time you visit and secure your connection. To learn more and to set up cookies: Click here

These cookies are strictly necessary for the operation of the site, you can disable them by changing the settings of your browser but you will not be able to use the site normally.

These cookies provide necessary information to applications of the website itself or integrated by third parties, if you disable them you may find some problems in the operation of the page.

These cookies are used to analyze the traffic and behavior of customers on the site, help us understand and understand how you interact with the site in order to improve performance.

These cookies can be from the site itself or from third parties, they help us to create a profile of your interests and to offer you advertising aimed at your preferences and interests.

The user is informed that he/she has the possibility to configure his/her browser to be informed of the reception of cookies, being able, if he/she wishes, to prevent their installation on his/her hard disk.

We provide links to various browsers below, through which you can make this configuration: 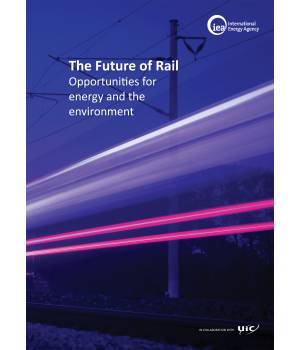 The Future of Rail

Rail is among the most efficient and lowest emitting modes of transport. With a strong reliance on electricity, it is also the most energy diverse. Rail networks carry 8% of the world’s motorised passenger movements and 7% of freight transport, but account for only 2% of energy use in the transport sector. Rail services consume less than 0.6 million barrels per day (mb/d) of oil (about 0.6% of global oil use) and around 290 terawatt-hours (TWh) of electricity (more than 1% of global electricity use). They are responsible for about 0.3% of direct CO2 emissions from fossil fuel combustion and the same share (0.3%) of energy-related emissions of fine particulate matter (PM2.5). The high efficiency of train operations means that rail saves more oil than it consumes and more emissions than it generates. If all services currently performed by railways were carried by road vehicles, such as cars and trucks, then the world’s transport-related oil consumption would be 8 mb/d (15%) higher and transport-related greenhouse gas (GHG) emissions would increase by 1.2 gigatonnes (Gt) CO2-equivalent (CO2-eq) on a well-to-wheel basis.

Most rail networks today are located in India, the People’s Republic of China, Japan, Europe, North America and the Russian Federation, while metro and light rail networks operate in most of the world’s major cities. About 90% of global passenger movements on conventional rail take place in these countries and regions, with India leading at 39%, followed by the People’s Republic of China (“China”) (27%), Japan (11%) and the European Union (9%). Globally, about three-quarters of conventional passenger rail activity use electricity, and the remaining quarter relies on diesel. Significant investments have been made in high-speed rail and metros, most notably in China, which has overtaken all other countries in terms of network length of both types within a single decade. Today China accounts for about two-thirds of high-speed rail activity, having overtaken both Japan (17%) and the European Union (12%). The regional distribution of urban rail activity is more even; China, European Union and Japan each have around one-fifth of urban passenger rail activity. Both high-speed and urban rail are entirely powered by electricity. Freight movements are concentrated in China and the United States, each of which accounts for about one-quarter of global rail freight activity, and the Russian Federation (“Russia”), which accounts for one-fifth. Despite the fact that electrification of freight rail faces greater challenges than other rail types, half of global freight movements rely on electricity.

The future of rail will be determined by how it responds to both rising transport demand and rising pressure from competing transport modes. Rising incomes and populations in developing and emerging economies lead to strong demand for mobility, but social considerations and the need for speed and flexibility tend to favour car ownership and air travel. Rising incomes also drive demand growth in freight, where higher incomes, together with digital technologies, have sharply increased demand for rapid delivery of higher value and lighter goods. The rail sector has important advantages to exploit in competing for business, but this will require additional strategic investments in rail infrastructure, further efforts to improve its commercial competitiveness and technological innovation.